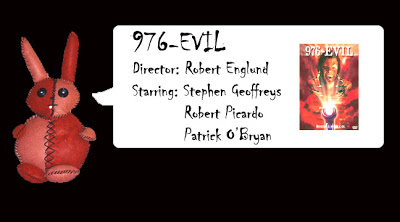 I love 976 and 900 numbers. Dirty talk and tales of your future at an unusually high price per minute. Maybe, you’ll get the first two to five minutes free.

Robert Englund, star of the Nightmare on Elm Street series, decided to give the paid phone hot lines a new twist with 976-EVIL. It starts out innocently enough. A caller dials 976-EVIL for his or her horoscope. A disembodied voice tells a rhyming fortune. Sooner or later, the caller discovers Satanic powers if he or she takes the line too far.

I myself dabble in horoscopes. While no expert, I know part of the horoscope involves the caller’s birthday. At no point was the caller asked for his birthday. The recorded voice just gave a date and a little poem telling his fortune. In this case, isn’t 976-EVIL really just a fortune telling phone line and not a horoscope?

This makes no difference to our hero, Hoax (Stephen Geoffreys). Hoax is your typical nerd. Whiny voice, pants that are a bit too short topped with a shirt that is too small on his skinny body. He is a target of punkish bullies who play cards every night in the projection booth of the local movie theater, the leader, a Martin Gore wannabe, stuffing his head in a toilet with his buddies every day while stealing kids’ lunch money, later to be bet off at the movie theater. He tries to hard to impress their friend, Spike, (Patrick O’Bryan) also Hoax’s cousin, following him around school and looking into his room through a telescope, particularly when sexual encounters are involved.

Get the feeling Hoax is missing out on a few things?

Well, a male figure for one thing. Hoax lives with his overly religious mother, her many cats and Spike, who lives in a far off room in the house, a lost cause to his aunt, a regular at the local movie theater, and a source of fascination and hero-worship to Hoax. Spike tries to get his aunt to loosen up where Hoax is concerned, and takes his head out of the toilet whenever he can, but after awhile, Hoax gets on his nerves. I don’t know about you, but if I brought somebody hot home, the last thing I want to find is a note through my window saying “nice Boobs” et al from my sex starved creepy cousin. I’d stuff his head into the toilet myself!

Like any curious nerd with a hero close by, Hoax searches Spike’s room and finds the 976-EVIL flier. Spike called it a few times and takes it lightly at first, even though he is tempted to shoplift leather gloves. Hoax, repressed and in need of something to do, calls the number. Pretty soon, he has the power to scare and kill a girl who spurned him.

What follows is your typical revenge story. While the focus of the movie is Hoax and his fall from grace, as it were, Englund throws in a small subplot of the 976-EVIL phone line, run out of a small warehouse office by a weasel named Mark Dark. He builds a contraption to answer the phone and tell different fortunes.

Good thing this service was free!

How does a rickety looking contraption give so many different fortunes to so many different people? That contraption is run by Satan. He tells fortunes, gives you powers and takes your soul in return. This is of no consequence to Hoax, who wants revenge on the bullies, his mom and later Spike for ignoring him.

The movie was suitably bad and entertaining. I couldn’t help but notice that this movie borrowed from Carrie regarding Hoax. Outcast with a religious fanatic for a mother and bullied by the tough crowd. No pig’s blood, thankfully. 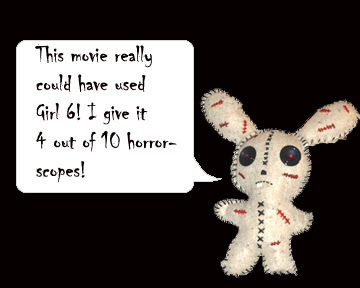