Welcome to another “It Came from the Queue” review. I came across the title “Cut” and the name, Molly Ringwald. My first thought was, could this be “Ducky’s Revenge” or some strange slash-tastic sequel to “The Breakfast Club?” I read Comcast’s synopsis and it looked to be the back drop to a true slasher movie, gimmick and all.

It did not disappoint. Ringwald played a B- actress in a horror movie that was started at some point in the late 1980’s but never finished due to the untimely death of the nasty pitbull director, played by Kylie Minogue. Ringwald’s character, the pretty teenaged lead actress, and a P.A. witness an actor, recently fired slashing up the director with the garden tool weapon his killer character used and turning to attack them. Ringwald, panicked, manages to stick him in the neck and electrocute him.

One would think that the film would get a dose of bad publicity and higher box office sales due to morbid curiosity. It might have, if they were able to finish the film. Funny thing; anytime anybody tried to finish the movie, people got killed.

Twelve years later, the P.A. man went on to teach and a group of his students attempt to finish the movie as a final project. Traumatized, their instructor warns them against it, and sets the viewer up to the back story of the film as well as what happens to the hapless souls who try to finish it.

Do they listen? It is slasher movie land, so they get the rights to the film for next to nothing, hire Ringwald to play the mother of her teen character, and go back to the old set where a figure dressed as the movie killer hacks and slashes his way through the cast and crew, as well as a throwaway pervert character.

I liked it, formulaic as it was. It had a Crazy Ralph stock character who warned certain doom, coitus interruptus by sharp objects, and while the villain in of himself was generic and derivative, an interesting plot twist gave him a little extra dimension. All and all, this film stands strong on its own and the final scare can open up an interesting sequel. 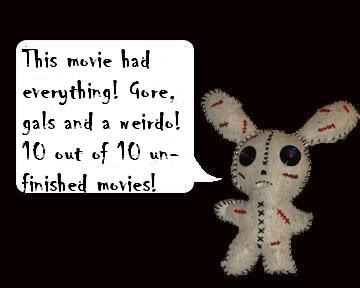