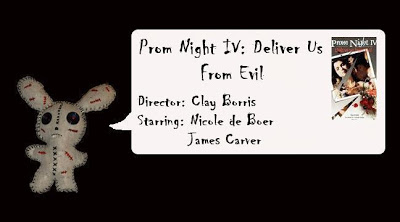 Welcome to another “It Came From the Queue” review. As mentioned, my free trial of Netflix afforded me a free double feature DVD of Prom Nights 3 and 4.

Boy, oh boy, was I glad that I received “Prom Night IV: Deliver Us From Evil” as part of my free trial.

This particular sequel did not feature the Mary Lou Maloney character as the antagonist. This time around, our story begins in the late 1950’s as did the last two Prom Night movies. However, the prom queen isn’t burned in a freak accident. Two random prom goers meet, chat and decide to go to the boy’s car to…..play twenty questions! That’s what they were doing!

The villain of this story, as horror villains are wont to do, creep over to the People About To Have Sex, the characters that you know are going to get killed first. Is the villain a spurned lover? A runner up to Prom Queen that wants the title? A hopeful Prom King who never had his moment in the sun or his fifteen minutes in the last movies?

If you guessed none of the above, then you would be right.

The specter is a local priest that headed to Hamilton High’s Prom to seek out and ultimately kill couples engaging in sexual activity. He manages to find teenagers doing just that, so Father Jonas (James Carver) stabs and slashes before anyone engaged in premarital sex.

Fast forward to the year 1991 where a young priest is informed that he is not going on his planned mission to Africa. It turns out that Father Jonas’s keeper dies of old age and Jonas, who is still imprisoned and alive, needs a new priest to give him his happy shot in between masses.

No one thought to call the cops, even after thirty some odd years. This blew my mind throughout the movie.

The young priest forgets to give Jonas his shot, and Jonas, even though he is probably a junkie at this point, manages to not only wake up, but has the strength to free himself and strangle this other priest who is much younger and with it than Jonas. I don’t know much of anything about stigmata, but I don’t think it prevents withdrawl or gives the afflicted that kind of super strength.

One can’t help but wonder the kind of scandal that would have ensued. The movie does not touch upon that. I bet if they did, and skipped the current batch of prom goers, there would have been a better movie. I digress.

Free to wreak havoc all over any teenagers that dare to screw around, Jonas then follows two couples that skip the prom to go to a cabin house belonging to the parents of one of the cannon fodder, I mean teenagers. From there, we see everything from obscene phone calls to the theft of wine that ‘was worth more than the house’ to misplaced girlfriends to our villain stabbing a kid about to film his big brother having sex with a metal crucifix, all leading to the big chase scene of the last surviving good girl survivor (Nicole de Boer) to an abandoned shed in the house and an explosion, ending the evil priest once and for all…..so you think!

I wasn’t impressed, or scared. There was little gore or even violence shown. The story was weak and the performances were sub-par. It wasn’t even so bad it was funny. It was a very poor movie, even for a bad franchise sequel. 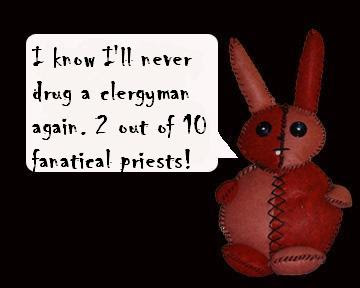