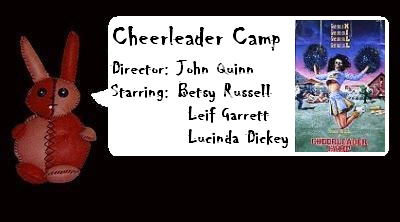 As I’ve mentioned in previous blogs, horror movies touch upon our own fears. “Cheerleader Camp” addresses the flip side of the popular image of the pretty, perky, popular and by some turns, snobbishly unattainable cheerleader in many a teen movie in the 1980’s and later. I was interested in renting this movie because I was a former cheerleader. I was on my squad in the sixth grade and the junior varsity team in the tenth grade. This did not increase my status on the popularity food chain in either case, and my rigid and nasty coach in the sixth grade was a horror movie unto herself!

Needless to say, I was looking for a little bit of a karmic body count!

It delivered to a degree. An isolated wooded town holds a small camp was deemed a perfect place to host a cheerleader retreat where teams from different high schools compete for the honor of best squad, best team mascot, and Cheerleader Queen. As there were no reports of any serial killers, or deranged men in hockey masks and a supernatural claim to the camp site, our heroes and staff felt safe to go. I’d be concerned over the dirty old men on the staff and the former cheerleader hostess not allowing mascots to remove their masks when they are trying to eat the cafeteria food provided, but no one does much about this.

Our heroes are a ragtag team of mostly snobby cheerleaders, their shy misfit mascot, their randy assistant coach and I guess a choreographer/photographer who is a worse pervert than the assistant coach. There is one nice cheerleader in the bunch, namely Allison, who is plagued by an intense anxiety dream in the opening sequences of the movie. She is alone in the locker room trying to find her uniform only to find herself late and booed when she finds herself without a team on an empty football field. She is eventually attacked by her pom poms and about to be stabbed and gored by tinsel as she wakes up in a van with the rest of her team teasing her.

I was never given pom poms during my brief cheerleading career. I think I’m realizing why…

Anyway, on top of what appear to be recurring nightmares where she either witnesses or kills other cheerleaders and the pressure to win the camp competition, Allison is confronted by her assistant coach boyfriend hitting on other girls both on and off her squad, leers from middle aged male staff and their pervert photographer. The cherry topping this drama llama deluxe sundae is the snooty nastiness from the camp coordinator, judge, master of ceremonies and overall foil to all that don’t kiss her ass. I’m thinking she was a bit of a queen bee in her own cheerleader days and desperately wants to hold onto the spot in adulthood.

Allison’s only comfort comes into the form of Corey, a shy, unassuming and less popular member of the pecking order as team mascot. No matter as there is a killer picking off cheerleaders, focusing mainly on Allison’s squad, and Allison’s dreams are getting more premonition-esque. Seems that if she dreams of a rival getting knocked off, it starts to happen….

Did I mention that this camp is located in a wooded area?

I have to say, that this movie was a little formulaic, and did not need the dream premonition sequences. It could have turned the cheerleader image on it’s ear with better choreography and acting….but that fell through. On the other hand, Leif Garrett was a good philandering creep of a boyfriend who turned to other girls when Allison refuses sex on account of dreams and anxiety. The identity of the killer was a little too obvious, but it did derive a chuckle from me at the end of the movie nevertheless. Overall, a decent rental. 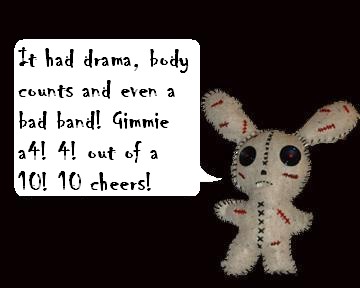