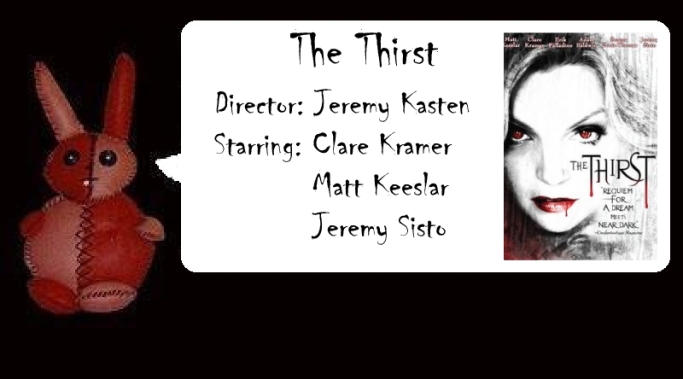 I could watch Jeremy Sisto all day. As a matter of fact, I just binge watched the ABC series, “Wicked City” where he plays a detective trying to solve a series of sunset strip murders while facing his own demons. I had little hope that “The Thirst” was going to be a quality vampire movie, but it was in the clearance bin, and I like both Sisto and Clare Kramer.

This wasn’t the first or last time that I asked myself “How bad could this possibly be?” I should probably stop at some point, yet I am continuously compelled, and I have put this off long enough.

Our direct to video story begins with red close ups of a coffin being handles by a lace cuffed hand and a blond woman walking the city streets past motels until she finds something especially skeezy. I would have run once the lights started flashing red over the opera music, but that’s atmosphere, right?  Up until her client decides to show himself as a vampire to possibly protest that her prices are a bit much for the services, or that he wants to shove a lampstand down her throat while drooling profusely.

Our next shot shows our recovering addict hero, Maxx (Matt Keeslar), complaining about his user girlfriend, Lisa (Clare Kramer) possibly stripping and using drugs at his NA meeting. As it turns out, Lisa has cancer, and it isn’t improving despite aggressive treatment. She can’t tell Maxx for fear of messing up his recovery. Lucky for her, Lisa has attracted the attention of a ‘shrink’ by the name of Mariel….who likes to come in her hospital room at 3 in the morning….and bite her while drooling.

I know that some hospitals are very underfunded, but this is ridiculous.

After the scare, Lisa calls Maxx and tells him of her illness. He is angry, storms out and turns to a friend, Macey, who comes on to him. When he tries to see her at the hospital, they learn that she left with Mariel. He returns home to find that she killed herself, but there is a little more to it. After a mourning hermit period, Maxx sees Lisa dancing at a goth club despite his friends’ insisting he’s crazy. Lisa is alive after a fashion, and she turns Maxx into a vampire. They join a coven of much older vampires led by Darius (Jeremy Sisto) and turn their addiction from hard party drugs to blood.

Let the grown up after school special begin!

Good gimmick to treat vampirism as one would treat drug addiction, but bad acting, and bad follow through. It’s different that the vampire characters are drooling as opposed to sparkling, but that was far too much red lighting for one movie.

I guess they want to emphasize blood….blooood…..BLOOOOOD!

And about that blood,  I think I saw better blood effects with Kool-aid. Nevertheless, Sisto’s first scene where he rips open a bouncer’s throat, drinks and later get’s his coven to follow suit with overly dressed cyber goths once he enters the VIP lounge had its humor. Jeremy Sisto, who I think is a good actor, phoned that role in a bit. I can’t blame him, though I wish the Eastern European accent was consistent. There was a less than star turn from Adam Baldwin as crazy redneck vampire Lenny. The mannerisms suggest the Lenny character from “Of Mice and Men” might have been a loose inspiration, but probably should have left John Steinbeck out of this. Those vampires might have drooled over prospective victims, but this movie left me pretty dry.