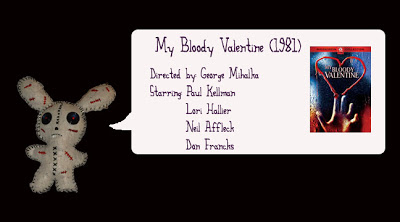 If you hate dances, and you hate Valentine’s day even more, this is the movie for you. If you want to view a quality flick with no plot holes whatsoever, well, you’re at the wrong site.

The focus of the movie is a Valentine’s dance in the small town of Valentine’s Bluff, Canada. Twenty years previous, a group of miners were trapped in an old mine shaft after a gas leak. Their supervisors, prefer instead to go to a local Valentine’s Day dance as opposed to waiting the extra time it would take for their workers to get out safely. As many horror fans know, the horror movie world is far different from the real one. Even though the foremen go to the dance, and ignore the safety of their workers, they do not get fired from their posts, nor get charged for negligence or indifference to human life.

There is one survivor from the disaster, Harry Warden, who found eating a limb of one of his fellow miners and was committed after his ordeal, which lasted 6 weeks before they were rescued. A year later, Warden escapes, and kills his old supervisors on Valentine’s day before the dance. He leaves behind a warning never to hold another Valentine’s day dance.

Twenty years later, they decide to hold another dance-that is until bloody hearts appear in candy boxes and the head of the party committee is murdered and stuffed into a dryer in the laundromat she runs. The local youth still want to have the party, but once banned by the police, decide to have their own party-surprise surprise, they want to have it in the mine.

I did like this movie. I liked that it was a group of twenty somethings playing twenty somethings as opposed to playing teenagers. The setup for the killer attacking our heroes in a mine, a dark place full of twists, turns and the prospect of a cave in was a great idea. What I didn’t like was the resolution. The killer turned out to be a different person, and it seems the writers were going for a surprise twist, but it really just left you scratching your head because it really just came out of nowhere. And why weren’t the supervisors arrested for their negligence, especially after one of their workers had to resort to cannibalism to survive being buried alive for 6 weeks? How sociopathic would they have to be to even go to the Valentine’s day dance after what they did? This is one weird little town!

It was a good idea overall and had potential for a good story, but bad characterization and plot holes killed the scare factor, especially since little gore was shown. 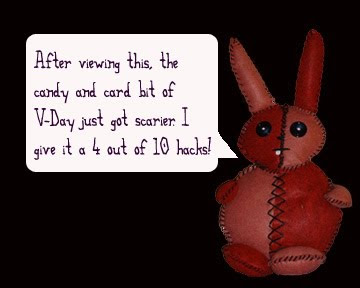