I have to say, I like Tobe Hooper in my own special way. His body of work is quirkier than most iconic franchises. One immediately thinks of “The Texas Chainsaw Massacre,” but someof his other movies, such as The Funhouse, based on the novel by Dean Koontz, have a similar format. If you see Tobe Hooper’s name, nine out of ten times, the movie is about teenagers stumbling upon a sketchy family of freaks protecting the one relative that just so happens to be a hideous monstrosity bent on knocking off these kids one by one.

The Funhouse tries to play on childhood fears of clowns in the opening credits. As the cast is read off, you see shot after shot of every type of grinning clown common at carnivals, which is where our story will take place.

The carnival has come to town, but our herione, Amy (Elizabeth Berridge) is forbidden to go. The year before, a murder was committed at the carnival, but *dun! dun! dun!* no body, or no murderer were ever found. Seen as this is a small town with little excitement, or anything better to do on a date, she doesn’t listen. Neither does her younger brother, Joey (Shawn Carson), who sneaks out the window after the parents retire for the evening. The stage is set.

Enter the cannon fodder. We have Amy, who you’ll soon realize is the virgin due to her discomfort at the joint passed around the car and being told by her friend, Liz (Largo Woodruff) to loosen up, lest she graduate a virgin. Liz, is the obvious blond party girl, making out with her rather geeky boyfriend, Richie (Miles Chapin) and smoking up in the car of Amy’s date, Buzz (Cooper Huckabee). Buzz is a greaser type who seems to want to get a little action, but is apologetic at his bad behavior once they get to the carnival.

What follows is your standard walk around the carnival, taking in some rides, winning cheap stuffed animals after spending a boatload of cash and some cotton candy with a freak show. Sounds like a typical double date, right? Problem there is the spooky old lady that screams “The Lord is watching you!” as Liz advises Amy on the art of seduction. A bloody faced man eyes the girls. There is a tent that serves as a strip club and a man with a limp and hunchback wearing a Frankenstein mask. He tends to the Funhouse ride, a simple cart on track concoction with knife wielding dummies and clowns, and eyes our Scooby gang as they enter the tent of freak animals, including a two headed cow.

Between you and me, if this were my carnival, even with my own morbid horror movie soaked mind, I’d want to leave. Our cannon fodder, I mean, meat, I mean, the teenagers decide what fun it would be to stay overnight in the Funhouse. Of course, when they agreed to this, they did not count on witnessing the murder of the fortune teller/prostitute at the hands of the Frankenstein masked man, who is horribly disfigured underneath the mask. They sure as hell did not count on the monster and his father finding out they witnessed this crime, trapping them in the funhouse, and stalking after them.

I have to say, I did enjoy this. However, there were just a few things this movie could have cut. For instance, Amy’s little brother, Joey, is just there to sneak out, get shot at by a guy trying to pick him up in his truck, find out the monster, but instead of helping his sister, he is brought home by one of the carnies. Now if this were my kid and I heard some slimy looking man say “I warshed him up real good,” I would call the cops immediately, thinking he was molested. Nope, they take him inside and don’t even ask about the sister. While on the tack of the brother, I honestly thought they would do more with his character. His room is a shrine to a serial killer. Monster posters are one thing, but there is wall to wall weapons and his first scene consists of a ripoff of the shower scene in ‘Psycho.’ I watched an episode of ‘Cold Case Files’ and the suspect was more or less convicted by the disturbing drawings and weapons in his room. I don’t what kind of parent would let that go, yet warn their teenage daughter not to go to a carnival due to the events of the year before.

There was potential for scare factor, mainly in the dysfunctional nature of the characters. The horrific events almost seemed plausible…Almost. It fell through on delivery and the viewer is left with a sense of “What just happened?” 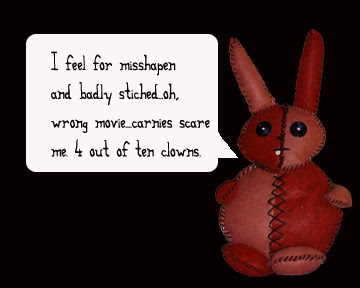