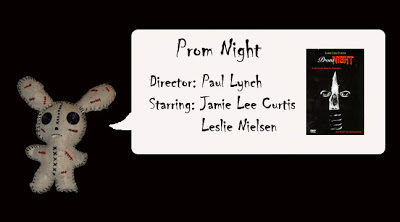 A teenager’s senior prom is often an important event in their young lives. The event entails a great deal of preparation, and much of the parents’ hard earned cash. It can also be a time of great anxiety for the outcasts of the high school pecking order, those that perhaps cannot find the right dress or tux, or those who haven’t any chance of finding a date. Prom night can mark the ultimate humiliation for any outcast that dares to tread into this haven of the more socially acceptable. It can also mark any number of tragic events, events that can make a fine horror movie if you think about it.

This is not necessarily the case in this movie.

This movie does, on the other hand, reinforce one of many horror movie conventions. Young actresses may start out in slasher movies before making it big. This is also pointed out by Stomp Tokyo. One can look to Jamie Lee Curtis in Halloween and Halloween II, Sissy Spacek in Carrie and Patricia Arquette in A Nightmare on Elm St 3: Dream Warriors.

Our story takes place in a small town where a group of children play hide and seek in an abandoned building. They taunt the youngest of them, a girl named Robin, and she takes an accidental fall to her death. Six years later, an unknown stalker calls all involved in Robin’s death and one by one kills them at their senior prom.

I can understand this premise as an event such as the prom will bring this group together. There is also opportunity to humiliate or scare them in public. Our killer, who could be any number of people, including the child molester wrongfully accused of Robin’s death, kills our cannon fodder one by one in secluded areas. The only scare in this kill fest is the head of one of the victim’s rolling on the stage where the King and Queen of the Prom would have been crowned. After the auditorium clears out, the killer is almost ready to be revealed.

As to the identity of the killer, the movie is set up so that it could be any number of people. The director seemed to have been attempting a surprise ending, but the killer’s identity is too obvious and there is no elaborate chase scene, death or real resolution of the movie, so I was more confused than anything.

I was further confused over Jamie Lee Curtis’s role in this film except to play Prom Queen, Kim. She was Robin’s older sister, but she was never involved in her accidental death or her friends’ subsequent cover up. Why wait for the senior prom in the first place to exact revenge for her death as the event, or any dance, is separate from Robin’s death? And why was there a Saturday Night Fever-esque dance sequence and bad disco music. Did Kim and her date have to take center stage to show up her old friend turned rival and her punk boyfriend? I don’t know, but I got a good laugh out of it, nevertheless.

I enjoyed this movie. It was fun, and while not Jamie Curtis’s best performance, she was pretty good. The viewer could have done without the disco sequence, and the sequels after 2. 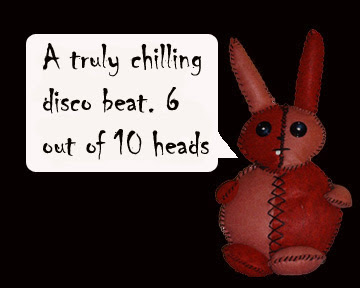