This September, I completed both a personal and professional goal. I got to see Portland, Oregon for the first time, and I took Happy Kitty Studio to the West Coast, my first convention that required air travel.

For the most part, I traveled by car. One year at Otakon, I traveled by bus, taking a suitcase of display materials with a duffel bag of plushes shrunk down by a space bag. This allowed me to also pack clothes. Down to two bags and some knitting for the trip, I had yet to find out how useful this was when I got sick to my stomach on 7-11 donuts the last day of the show. At the time, I was gloating over the discount I received for booking early. I was hoping that the same didn’t happen when we boarded a plane bound for the west coast and back.

Also, how was I going to get as much merch into as few bags as possible? 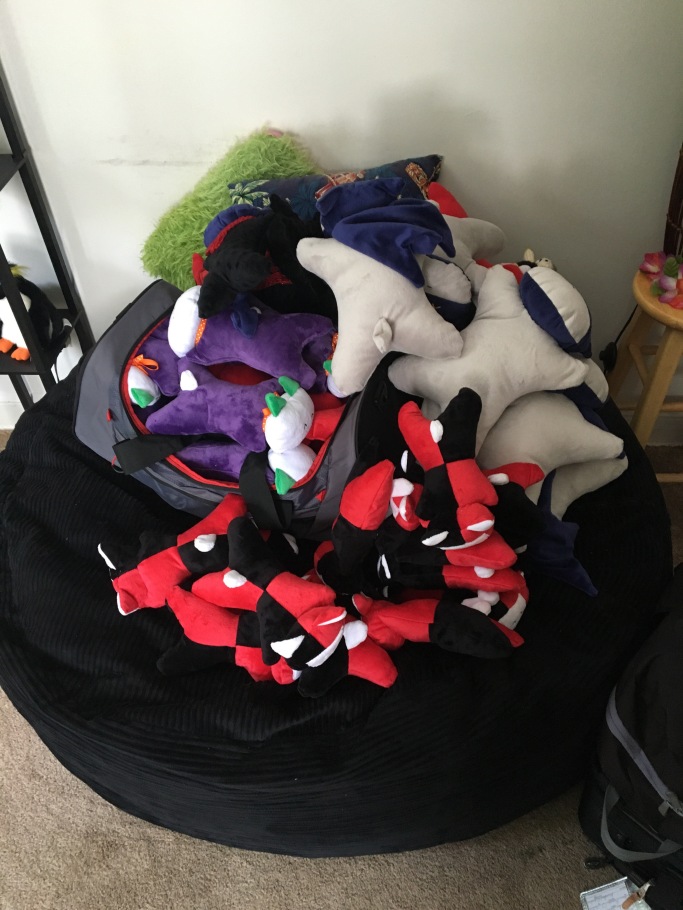 Putting the labor in Labor Day

I had from August 28-September 8 to get everything together. While I didn’t expect to do as well as I did at CT Horror fest, it happened and I had to restock on a sizeable scale on top of my day job. That week, I drew and cut patterns most evenings. I looked forward to an ace in the hole that was a long weekend.

Saturday and Sunday, I completed 24 cats. One day was dedicated to the sewing machine construction and the second to stuffing and putting them together. While I have my system to expedite the process, it is repetitive and time consuming. There is also so much a person can binge watch. Monday was the day to construct 12 Harley Quinn cats. Out of all the villain cats, I think she’s my favorite. Like her knitted doll counterpart, while a little more challenging, the end result is a joy.

What’s not to love?

Monday was the sewing day, meaning the fabric bodies and head were cut up and stitched back together in the harlequin four quarter pattern before I stitched a white mask, put together ears and tail and by 11:00 that night, I had twelve plushes to stuff and attach.

In hindsight, I should have taken Tuesday off, but, there were tasks I needed to take care of. By 2:43, I was on the phone brainstorming with a colleague as to how to run a script to add online handles in a batch because I was out in 45 minutes not to return until next Thursday. We do it, and I manage to ensure that two other batch loads went through correctly. Feeling rushed, I walked home hell bent to complete those cats.

I was seven cats in when I felt burnt out. By the ninth cat completed, I couldn’t do any more. Camped out with the Hulu criterion collection film, Fear, it hit me that it wasn’t yet 9:30. I was grateful that I took the next day off. I sleep until 10:00,  eat apples and cereal with my pumpkin spice coffee (I love you, fall foods and weather despite it being a few weeks from being official) and hammered out a few travel plans with Stefanie while finishing the last three cats. 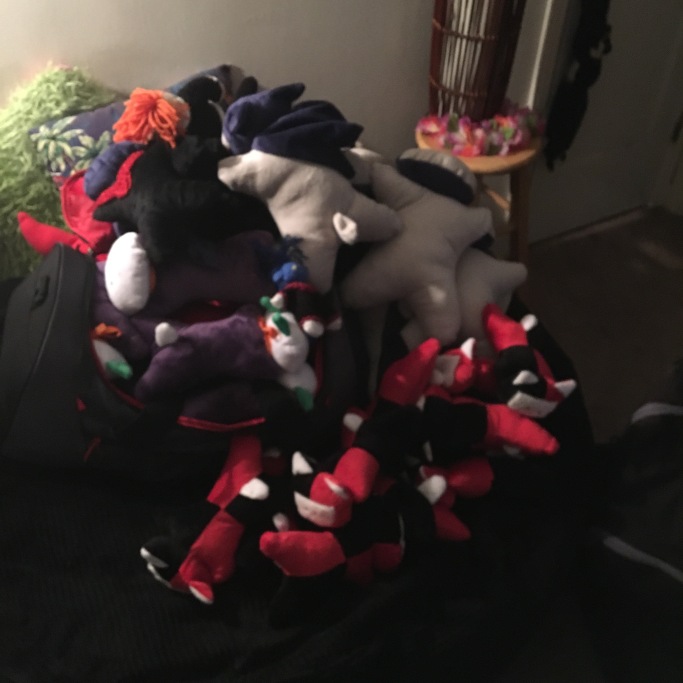 Pile on the plush

It was time to head out….

I picked up Stefanie and headed to casa de Peli, which thankfully is near the airport. We have amazing takeout Indian food with her family. Her dad picks ghost peppers from his garden.

They were wonderful, but I got drooly at one point. Pro tip: never eat the seedy half in one bite!

After a few episodes of Archer, we got some needed sleep and headed to the airport. We got a little turned around, but we made the flight with time to spare.

Part of me was very tempted to head to baggage claim, and while searching for my suitcase, which contained cats on top of the carry on, yell out that I wanted those motherfucking cats of this motherfucking plane now. But, there were no luggage issues and I doubt you could do that even in Portland, Oregon.

Then again, we had fifteen minutes to get from the plane to our connecting flight when we touched down in Chicago. Thanks, elliptical machine.

Thankfully, my friend, Desiree was waiting to grab us for food, coffee and  merch dropoff at the convention center. Portland, and the west coast as a whole, it seems, is very aware of dietary needs and restrictions from various food allergies and lifestyle choices. People want to work with you accordingly. Living in the northeastern section of the country, there are times when I feel the odd one out for being vegetarian. This can be a little disheartening for group events, and I feel like the sole complainer. Not in Portland. You can even find lavender ice cream in the local shop, which of course, we all had to stop at!

Rose City Comic Con was a bit of a bust for me, plus I was a little disheartened to be stuck behind a table when in Portland for the first time. Well, Desiree, her husband Jason and I more than made up for it when exploring the city proper as seen below: 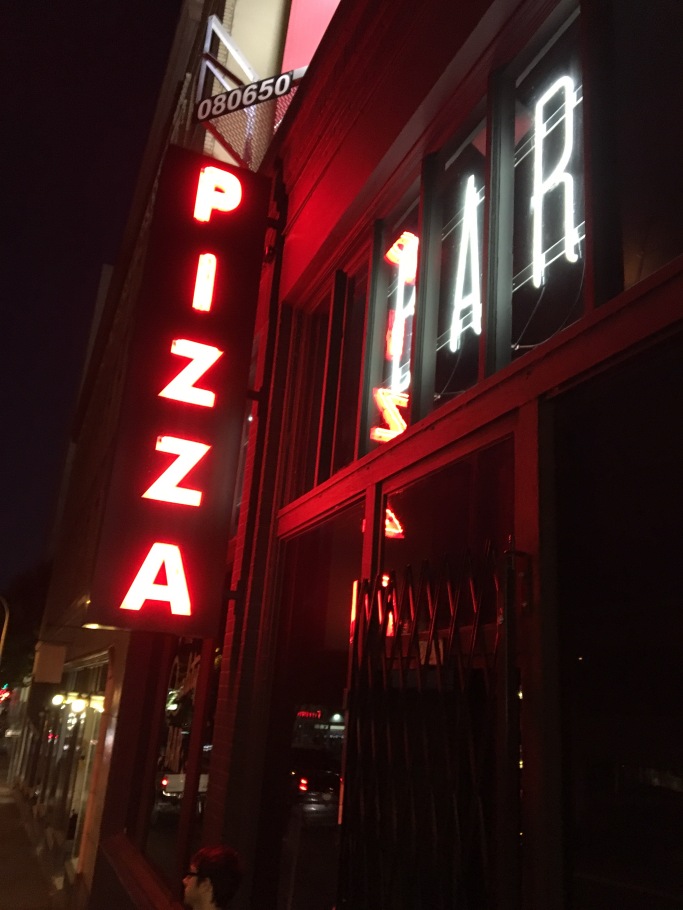 One thing that I noticed was a lack of yarn shops. I’ve seen galleries, bakeries, eateries of all types, and Powell’s books, the largest independent bookstore I have ever had the good fortune to enter. There was punk rock pizza, but no yarn stores. Either I have to explore this further, something I need to do anyway as I want to take a proper non convention vacation, or I need to explore this and set up shop……

It’s not the craziest idea I ever had.